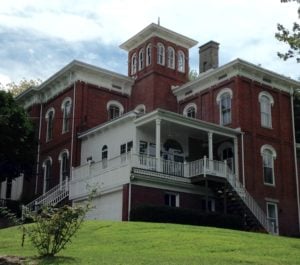 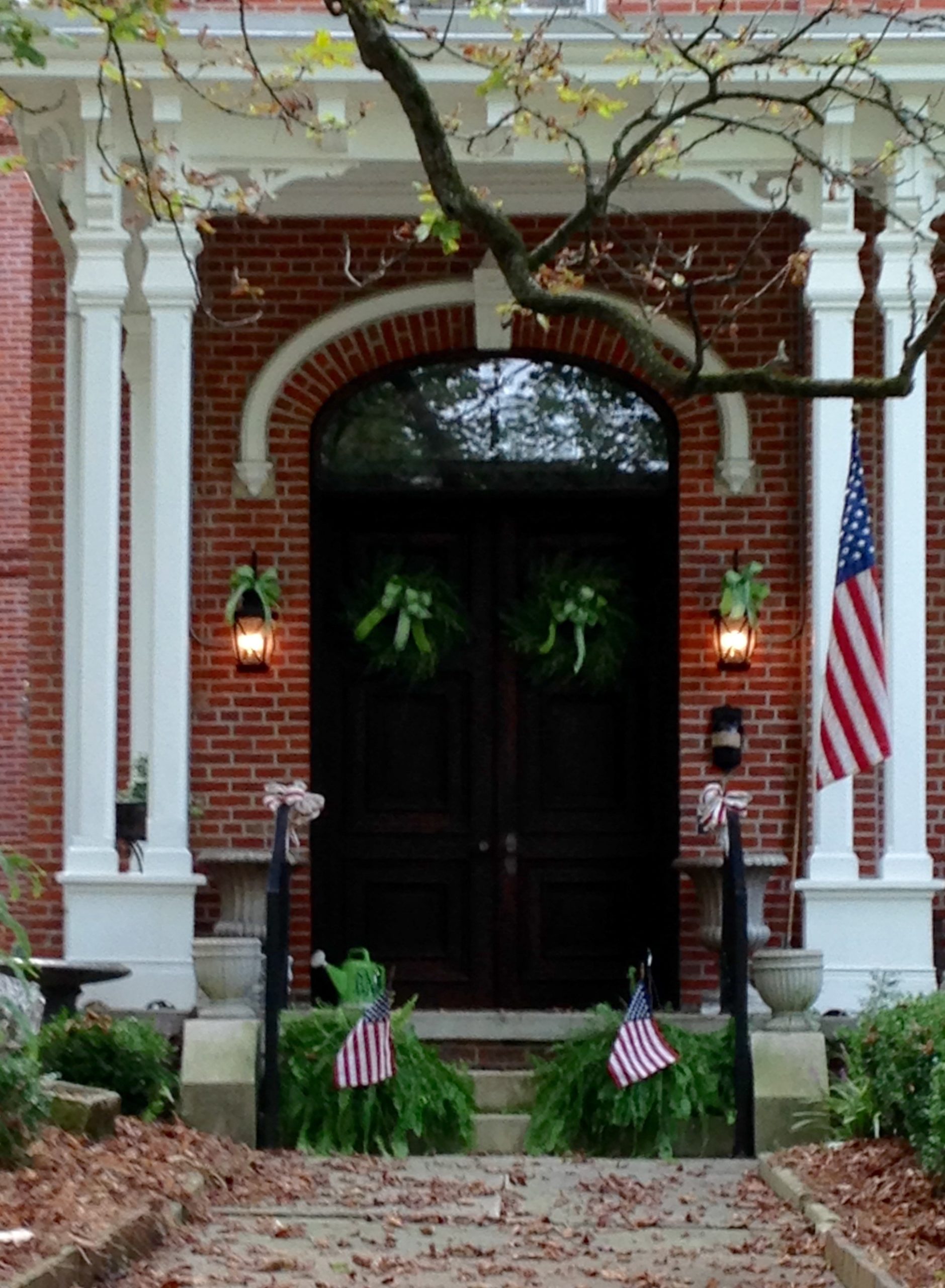 205 South Elm – This Italianate house was constructed just after the Civil War.  Legend says the 12’ x 12’ tower at the rear of the home held lanterns used to signal riverboats.  Columns on the front porch are original as is the gazebo in the backyard used to protect the water well.  Many of the interior fixtures are original to the home as well.  Details of this home such as the tall general appearance of the home; tall, narrow windows topped with ornamental hoods; square cupola; and decorative corbels are typical of the Italianate style. 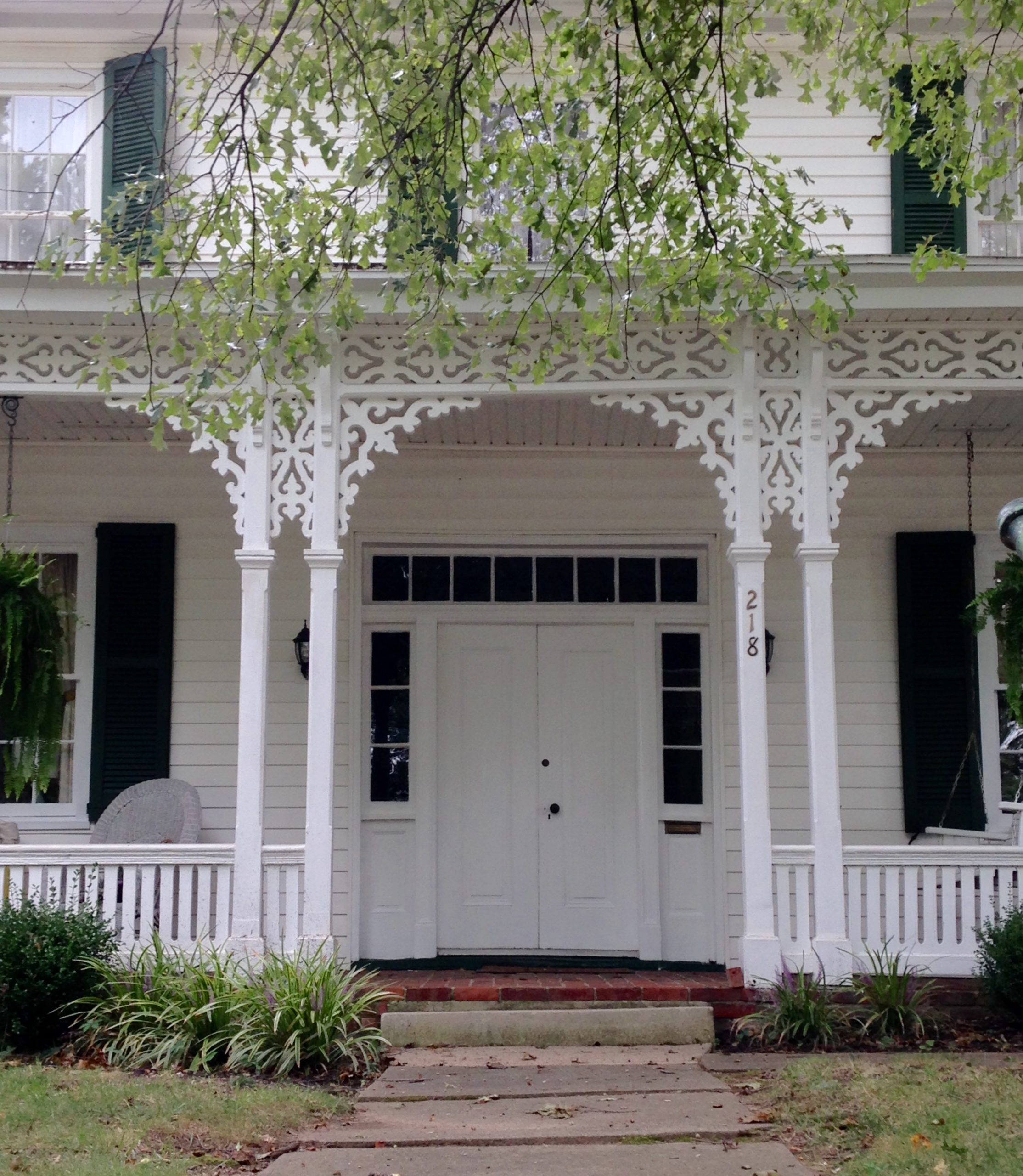 218 South Elm – Built around 1818-1820 by Captain Lazarus Powell, this Georgian two-story originally had two large rooms on each floor.  The glass above and on either side of the front door is hand-made water glass.  The front door is in the Greek Revival style.  The son of Capt. Powell, also named Lazarus, was governor of Kentucky from 1851-1855.  The one-story addition on the south side of the house served as his law office. 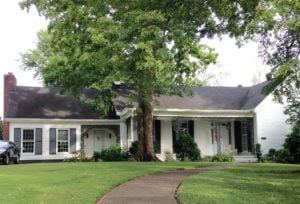 226 South Elm – Construction on this Federal-style home began in 1818.  The two-story south wing of the house is one of the oldest remaining structures in Henderson.  It originally faced Clay Street, but sometime prior to the Civil War, a single-story wing was added to the rear and the front entrance was moved. 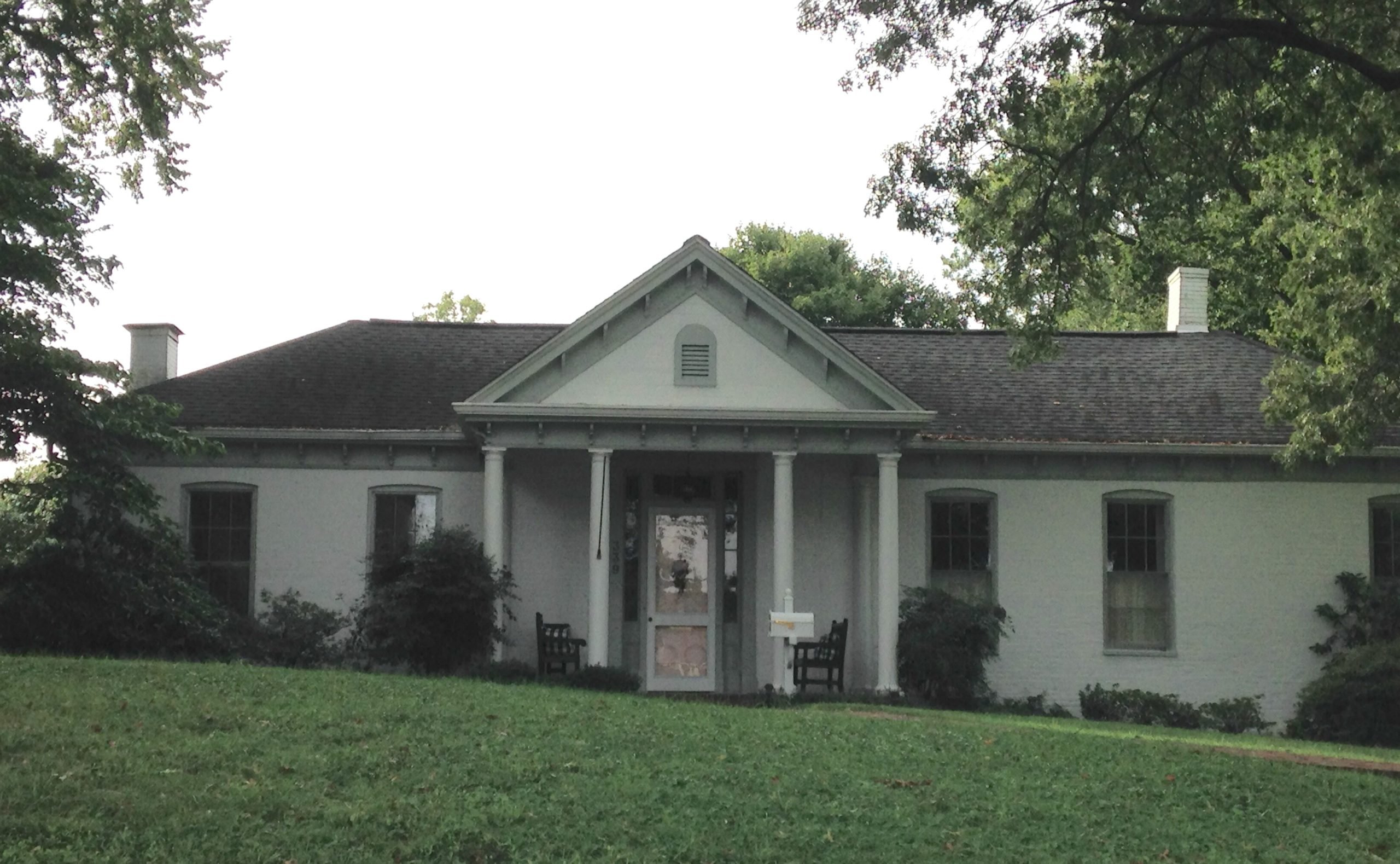 339 South Elm – Lot 187 of the original plat of the city, the architecture of this home reflects Federal-style evidenced by the arched windows, decorative brackets, and central door with two pilasters separating side portions of the house, and four more pilasters framing the bricked porch.  An engraved plaque on the front door reads “1854.” 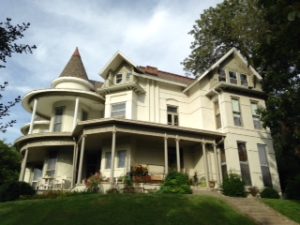 425 S Elm – Built in 1883-84 by Colonel William W. Shelby, this house on the hill was situated on one of the highest sites in Henderson.  Eclectic in style, the home was copied from a model seen at the New Orleans World’s Fair in 1883.  The brick used in this home was imported from England and most, if not all, of the stonework is original.  Steps leading to a trap door in the roof were included because Colonel Shelby liked to look out over the Ohio River. 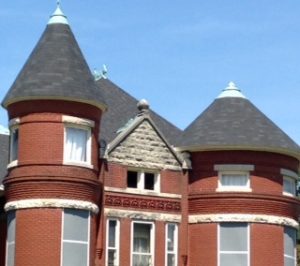 525 North Main – This home, built in the 1890s, is a excellent example of Chateaueque style with two large round towers, each with conical roofs and topped with decorative finials.  Examples of continuous corbelling may be seen below the towers.  Many details, both interior and exterior, including metal ornamentation, stained glass and the front door, are original to the home. 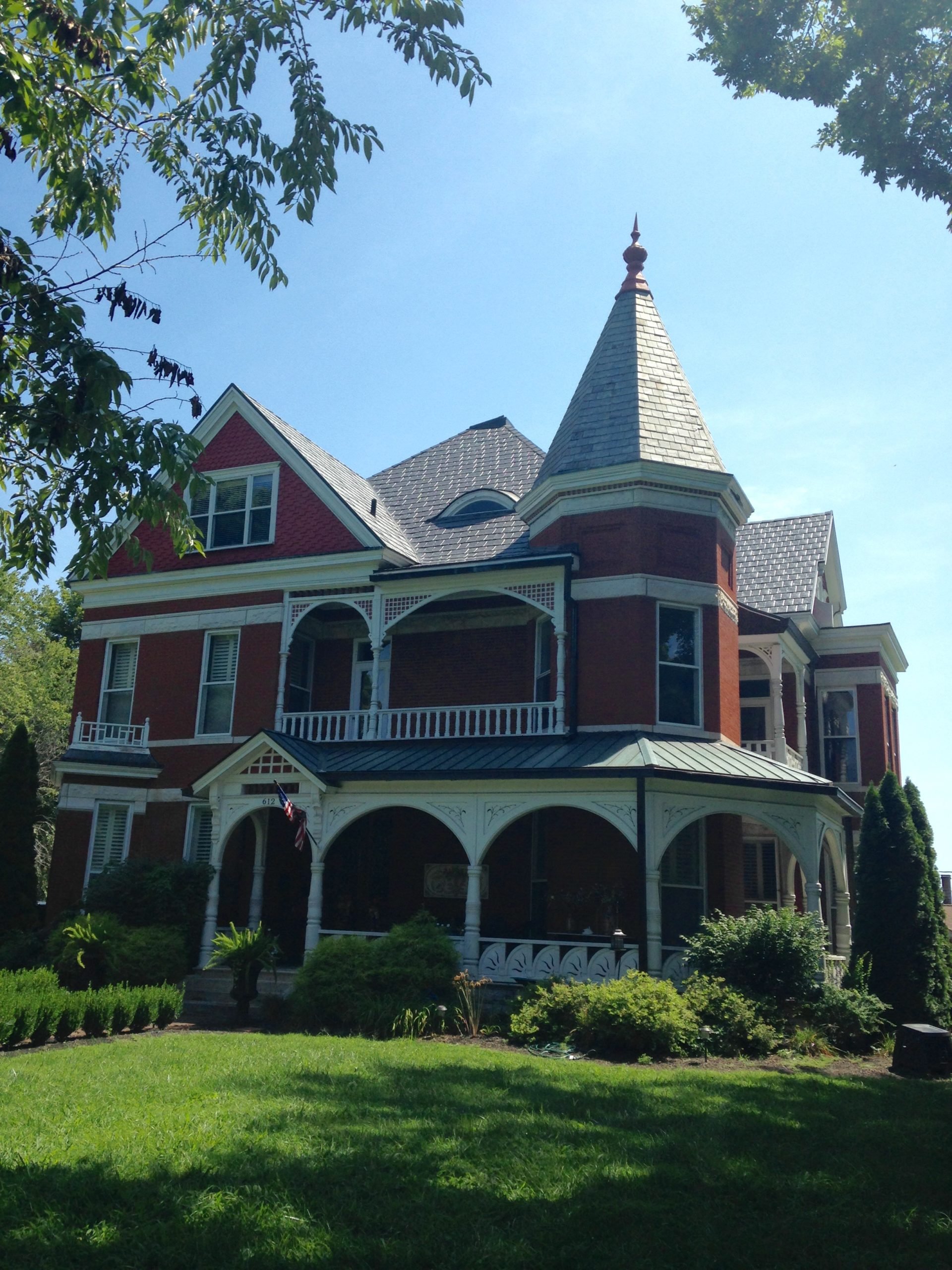 612 North Main – This asymmetrical, eclectic Queen Anne was completed in 1890.  The arcaded porch displays an unusual scalloped fan railing and the eyebrow window on the roof repeats the curved motif.  Bricks used in construction were made on the property.  This home starred as the boarding house in the 1992 movie A League of Their Own. 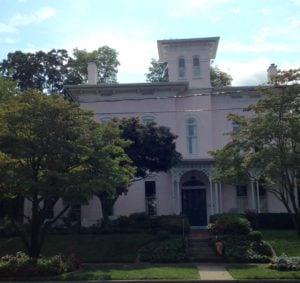 626 N Main – This two-story Italianate home was built in 1867.  Decorative corbels may be seen under the second-story eaves and under the cupola.  The narrow, arched windows, original to the home, are topped with ornamental hoods.  All walls in the home are solid thirteen-inch brick, and the home is painted pink. 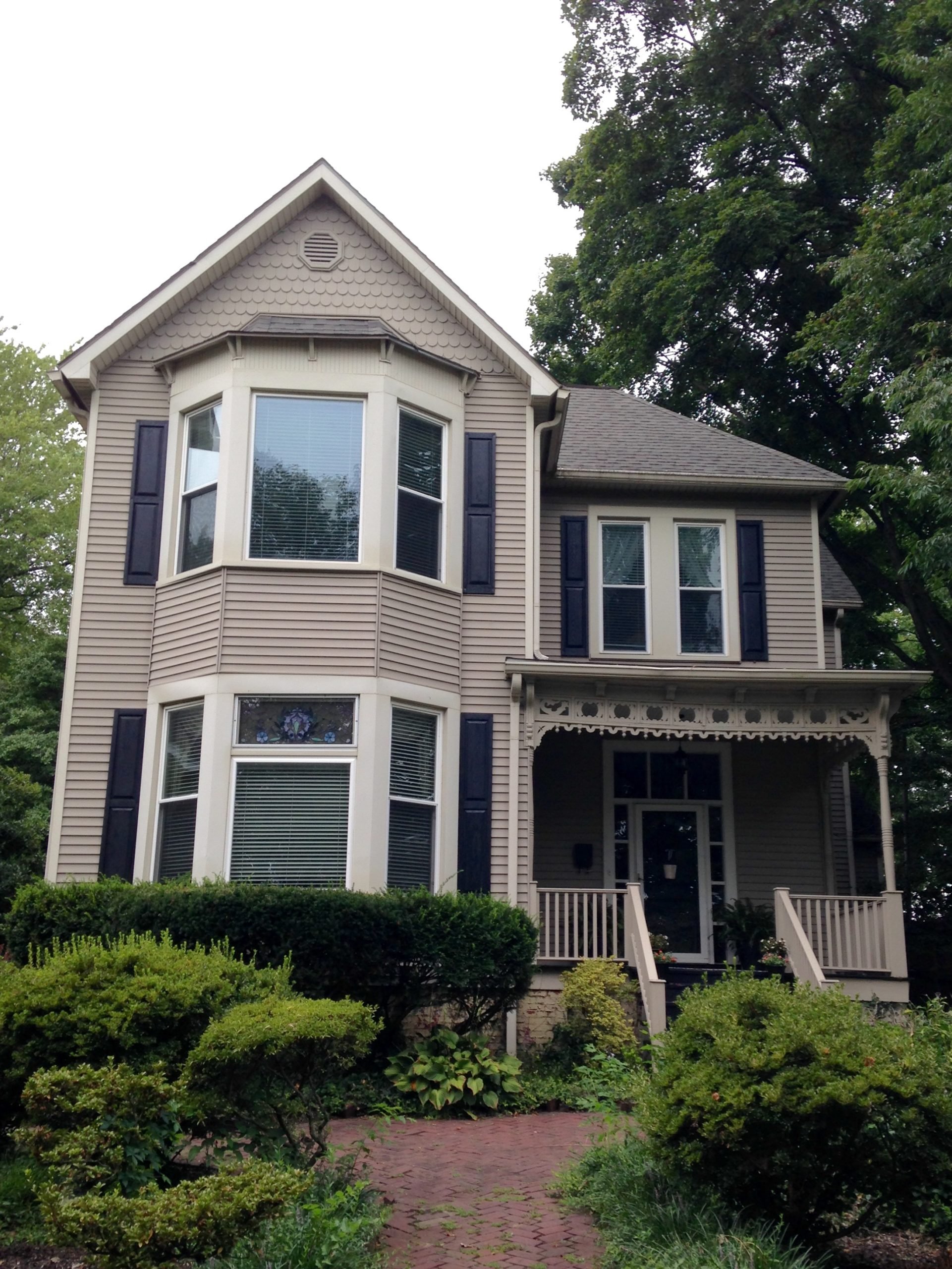 733 North Main – Built in 1874 at a cost of $2,800, this simplified Queen Anne style has a unique trim above the front porch and simple balusters (handrail supports); the lack of elaborate cornices are typical of Stick style.  The main roof is hipped (all sides slope downward to the walls) and the two-story bay with the shingled gable roof serves as the focal point for the frontage.  Stained glass in the bay window and wood plank floors are  original to the home. 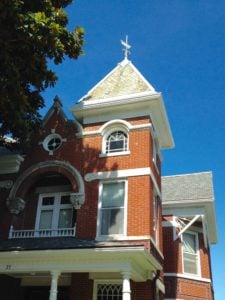 23 South Main – This two and a half story Queen Anne consists of stone, wood, and terra cotta exterior details with a square tower on the north corner and an octagonal tower on the south corner.  Gingerbread trim, spindles, and continuous corbelling may be found on the exterior of the home.  The double entry, leaded glass front door is original.  This home was built in 1899. 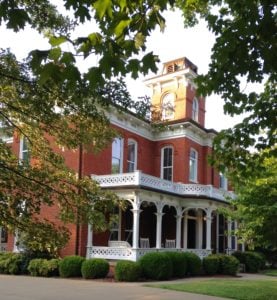 115 South Main – This Italianate home was built in 1878 for $3,000.  The three-story tower has a concave pyramidal roof.  The ends of the gables projecting from the hip roof are decorated with a sunburst pattern.  The pattern of dentil work trim is the only of its kind in Henderson.

304 S Main – This Queen Anne style home was built around 1847-48 with several additions, including the front porch, made throughout the years.  The large, welcoming porches, and gingerbread trim are typical of this style.  This house served as the Henderson Female Seminary, an institution founded in 1880 to “equip young ladies for society’s severest tests.”  The school typically had two to eight graduates.