Have You Heard of Henderson, Kentucky’s Lucky Horseshoe? 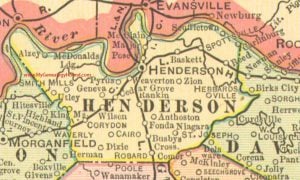 Legend states that hanging a horseshoe on or over the door of a home will bring good luck to those inside. Being situated on the Ohio River’s horseshoe bend, around here, we think Henderson holds the good luck! The mighty Ohio’s horseshoe bend makes some peculiar things happen in Henderson. Is it luck or coincidence? 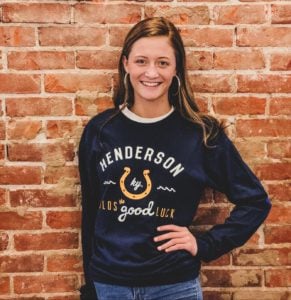 Take for instance the flood of 1937. Over 20 inches of rain fell in Henderson over an 18-day period. How is it that Henderson avoided major flood damage… our good luck maybe? The city of Henderson sits on a high bluff, so we were spared of drastic flood damage. Every other town in Kentucky located on the banks of the Ohio River flooded drastically, experiencing severe devastation. Leigh Harris, publisher of the local Henderson newspaper, wrote, “Henderson is on the Ohio, but never in it!” This popular saying is still heard today. 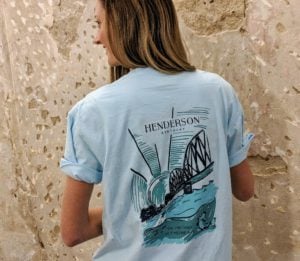 “On the Ohio, but never in it,” light blue t-shirt design.

If you go back further in history, the city of Henderson luckily dodged another near tragic event on the Ohio River. Henderson’s horse racing track, Ellis Park, is often mistaken as being located in Indiana.  But there is more to this story! 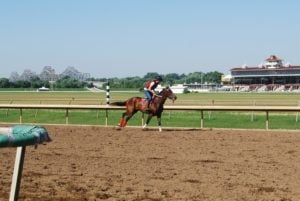 Ellis Park with the Ohio River bridge in the background. 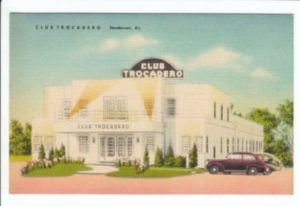 Speaking of trying your luck, Henderson’s horseshoe bend used to be home to one of Kentucky’s extravagant and elite underground gambling facilities called Club Trocadero. Though it operated on the books as nightclub, its reputation was known for the 400 illegal slot machines on the second floor. Only couples were allowed through the front door and there was a strictly enforced dress code. The club was partially owned by the town sheriff for a few years. Can you imagine the appeal of a luxurious and illegally operating gambling club that was partially owned by a sheriff? It didn’t matter if you were a townie couple or big name gangster, everyone wanted to try their luck at the Troc! 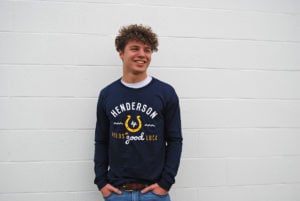 This story has us feeling like spreading the luck! Enjoy 30% off your online purchase from our gift shop through Saturday, June 20, 2020 using the code GOODLUCK30.