The original bridge was constructed in 1884-1885 by the Louisville and Nashville Railroad. Its longest span, 525 feet, was reputed to be the longest trestle span in the world at that time. A crowd of 8,000 people watched the first train cross the bridge July 13th, 1885, after many years of passengers and freight being ferried across the river. By 1930, the weight and amount of train traffic had taken a toll on the old bridge. Construction of the current bridge began in 1931, and it has been a staple in Henderson ever since. It is said by locals that Henderson has the most beautiful sunsets, so the bridge is featured in many of the riverfront sunset images that flood social media on a beautiful evening. 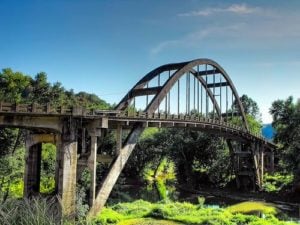 The West Prestonsburg Bridge, circa 1928, connects the city’s northern neighborhood with the relatively isolated West Prestonsburg area across the Levisa Fork River. It is an open-spandrel through-arch bridge, or a rainbow bridge, constructed of concrete. Being 400 feet long with an arch 100 feet long, it is known for its graceful appearance and prominence in the beautiful landscape. The bridge’s theme of engineering is a rare survivor of a once-common bridge design in Kentucky. 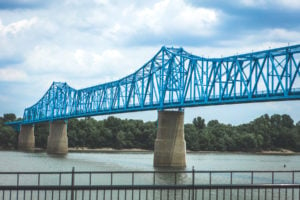 The Glover Cary Bridge was opened in 1940. It was funded through a $1.03 million federal grant as a part of President Franklin D. Roosevelt’s New Deal program. Originally a toll bridge, tolls were discontinued in 1954. The bridge was painted silver upon construction but was repainted blue in the early 1970s. It has been nicknamed “The Blue Bridge” by locals. In 2003, a local city beautification group released a public poll to let the public help decide what color to repaint the bridge. 44% of participants voted to keep the bridge its current blue, while the other 56% voted for 3 different colors or their own write-in color.

There are nine bridges that cross the Ohio River in the Cincinnati area, but only one is purple and just for people. The former L&N Railroad bridge had a $4 million dollar restoration and became a pedestrian walking bridge in 2006. Its official name is the Newport Southbank Bridge but it has become known as the Purple People Bridge. It is the longest connector of two states of its kind in the country. The bridge, just over half a mile long, links two riverbanks of entertainment, dining, parks, festivals, and much more. 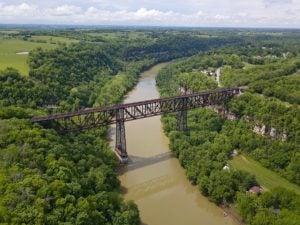 High Bridge was designed in 1851 by John Roebling, who later designed the famous Brooklyn Bridge in New York City. It was originally intended to be a suspension bridge but construction could not be sustained due to poor finances, resulting in the towers for the bridge being the only thing built. After the Civil War, the Cincinnati Southern Railroad picked up where the Lexington and Danville railroad left off. Instead of a suspension bridge, they used a cantilever design which helped to reduce material costs. When it was completed in 1877, it was the first cantilever bridge in North America. It was also the highest and longest cantilever bridge in the world, earning its name High Bridge. 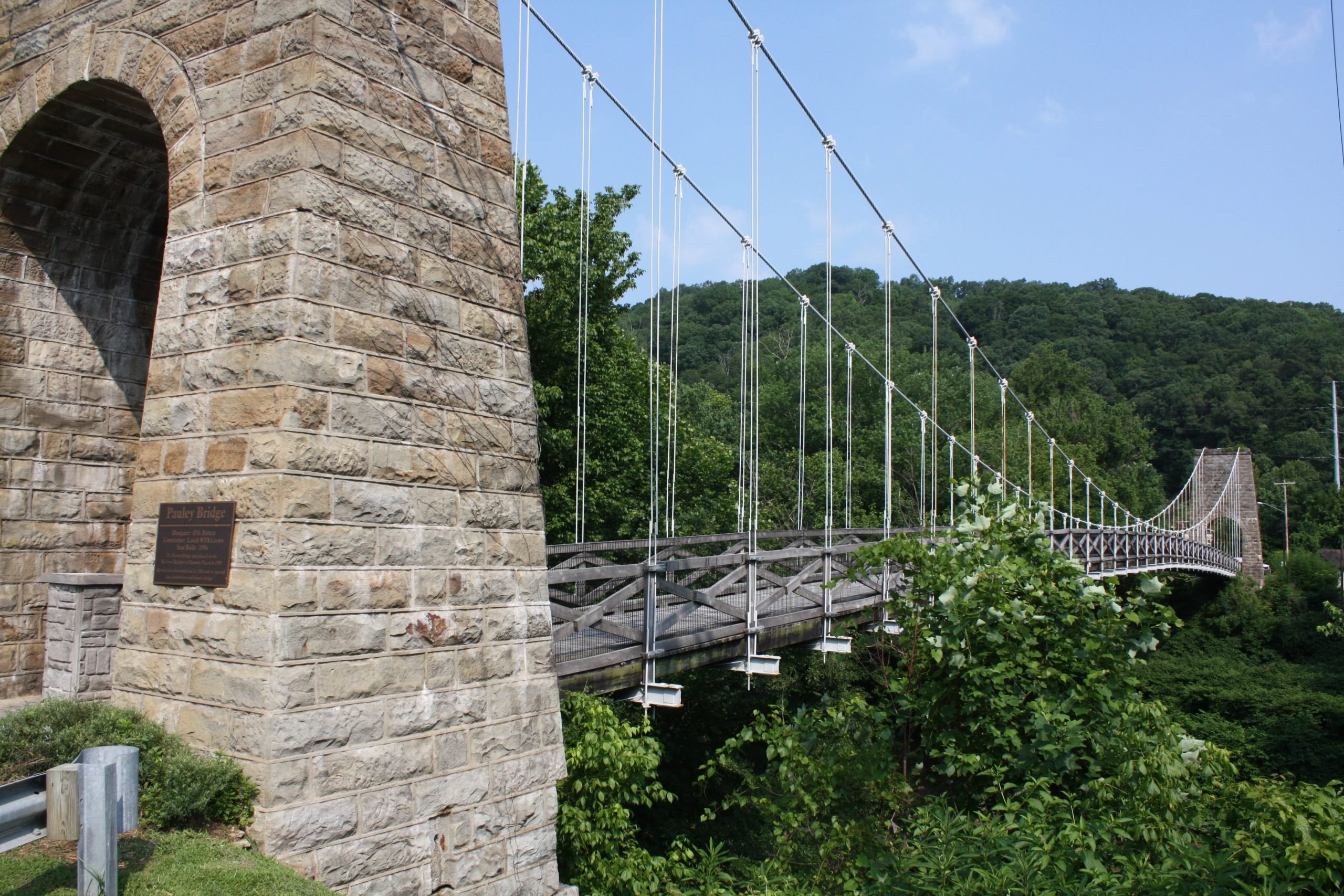 The Pauley Bridge is the perfect spot to take a stroll or a serene picture. This wooden bridge was built by workers from the Works Progress Administration completed in 1940. It is now closed to vehicular traffic, but foot traffic is still welcomed across the Big Sandy River. It is the only WPA bridge in existence that used sandstone as a material. It is marked “W.P.A.” and “1936” on each end. It was registered on the National Register of Historic Places in 1992.