A Christmas Carol Conspiracy in Kentucky?

We are honored to host guest writer and local historian, Frank Nally, this week to share his theory about a Dickens classic and Henderson, Kentucky! Was “A Christmas Carol” inspired by Henderson? You’ll have to read to find out the facts!

British author, Charles Dickens, introduced to the world a spiteful, penny-pinching businessman named Mr. Ebenezer Scrooge in his 1843 publication, “A Christmas Carol.”  My favorite quote from this book is when Scrooge says, “if I could work my will every idiot who goes about with ‘Merry Christmas’ on his lips, should be boiled with his own pudding, and buried with a stake of holly through his heart. He should!”

Who and where could have influenced Dickens for such a man as Scrooge; I wonder if Henderson, Kentucky could have been part of that inspiration? After researching the topic, here’s what I’ve been able to unearth:

“In the early part of this year, Charles Dickens, the renowned novelist, then best known as “Boz”, and quite a young man, was a passenger on the steamboat “Fulton,” en route from Louisville to St. Louis.  The steamer was detained here, taking freight, and during a great part of the time Mr. Dickens amused himself walking around the town, and viewing the sights, of which there were none more important than the town pump, which stood in the intersection of Main and Second Street.”

Second, Henderson County had it’s very own “Ebenezer.” The 1842 county tax list on page 35 shows a Mr. Ebenezer Risley living here in Henderson County. Could it be coincidence that Dickens stumbled upon a Henderson resident named Ebenezer the year before “A Christmas Carol” was published? See for yourself the record of Mr. Ebenezer. Not a popular name if you ask me! 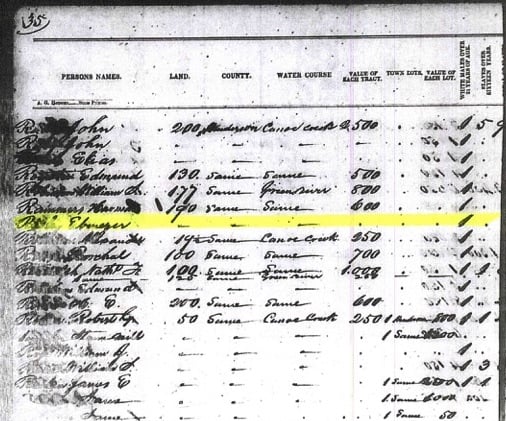 And who can forget Scrooge’s dreadful visit to the cemetery? Henderson’s city cemetery was just two a few blocks away from the riverfront where Dickens had landed on his 1842 visit. Can you imagine? Welcome to Henderson, here’s our cemetery of the dead… not so welcoming! After all, Dickens was not impressed with America during his visit. He said, “this is not the Republic I had expected.” Could it be that his stop in Henderson left a bad taste in this author’s mouth?

Next, Starling’s history records that in 1842, Mr. Joshua Mullins and his wife old Mrs. Mullins had an eating-house on Second Street which specialized in “ginger cake” and served liquor. In the novel, Dickens tells of Scrooge attending Mr. and Mrs. Fezziwig’s Christmas party where there was “cake and plenty of beer.”

Lastly, according to the novel, one of the Christmas spirits that visited Scrooge took him to “an obscure part of town, where Scrooge had never penetrated…the straggling streets, and the whole quarter recked with crime, with filth, and misery.” Dickens write of the poor and poorhouses, and Starling also mentioned how Henderson County thought it best to “purchase and maintain a county poor-house,” in the year 1853. In the same year that Dickens visited Henderson, Henderson County passed its first ordinance of a sanitary nature. The Henderson City Board of Trustees ordered, “that for the better preservation of the health of the town, the lot owners and tenants of lots be required to cut down all noxious weeds.” So maybe Henderson wasn’t quite as hospitable then as it is now. But it does paint a picture appropriate for a scene in “A Christmas Carol.”

Though Henderson maybe have not always been the hidden gem that it is today, it is sure interesting to think that maybe the town played a role in inspiring a holiday classic. After all, Henderson has inspired a few iconic figures like John James Audubon and W.C. Handy, in a more positive light of course! In conclusion, in the words of Mr. Scrooge, “Bah humbug,” and to everyone else, hope you enjoy this holiday season!

If you enjoyed this article, click here to sign up for our weekly blog articles delivered to your email every Monday morning.